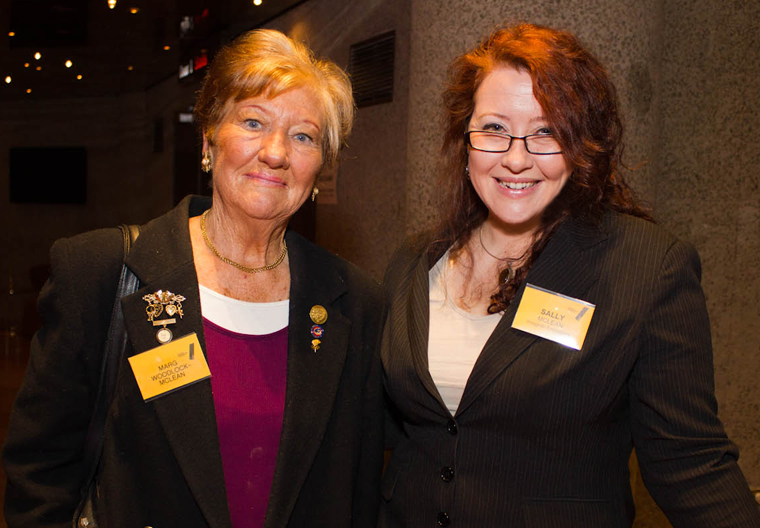 It was with great delight that myself and Marg Woodlock-McLean (Co-Producer, Fundraising) set off into the blustery Melbourne weather Wednesday morning to attend the 2012 AbaF Awards (Victoria) at Hamer Hall, Arts Centre Melbourne.

I had been nominated as an Individual Artist in the AbaF Giving Awards category for fundraising activities via the AbaF for “A Life Unexpected: The Franz Stampfl Story”.  This category is for individual artists and arts and cultural organisations’ giving (donations) programs: annual campaigns, capital campaigns, patron programs, bequest programs or projects supported by foundations.

After a rather scrumptious breakfast of strawberries and cream and a couple of glasses of very nice orange juice, during which time Marg and I finally met in person the lovely Denise Damianos (Manager, AbaF Australian Cultural Fund, who manages all donations for individual artists on the AbaF register), all guests were asked to be seated and the formalities began.

MC was Rafael Epstein (Drive presenter for ABC Radio 774) who did a great job in keeping the ceremony flowing with minimal fuss and a sense of humour.  The speeches from various political and Arts industry figures present were kept to a minimum and short, which is always a good thing and was most appreciated!

To start the proceedings, the list of nominated organizations was announced who had received a “Good Practice Recognition” nod from the AbaF Award judges for demonstrating good practice (based on their score against the awards judging criteria) in their work in fundraising. This takes in to consideration how the money is raised as well as how the donated money is used and utilised within the organisation, amongst other criteria.

As the list of 20 names scrolled over the screen, read out in turn by Rafael, it was with surprise that we realised that my name was amongst this group and the only Individual Artist from Victoria to be so honoured.  I was truly thrilled to receive this acknowledgement for our team, especially as we were listed among such august company as the Melbourne Theatre Company, the Melbourne Recital Centre, the National Gallery of Victoria, the Melbourne Writers Festival, Heide Museum of Modern Art, Museum Victoria and the Victorian Opera.

We then settled in to hear who had won awards in the eight categories.  I was particularly pleased for Moonshine Movies who won the Arts & Health Foundation Award for their innovative work in partnership with Palliative Care Australia and St Martins Youth Arts Centre who won the newly created AbaF Arts Access Award for their work to improve access for people with disability to their venues, programs and services.  You can see the full list of winners and “Good Practice Recognition” recipients here: http://www.abaf.org.au/arts/abaf-awards/abaf-awards-2012-in-victoria.html

While we didn’t win the award for our category – that went to the Heide Museum of Modern Art for their successful fundraising partnership with ANZ Trustees Limited (a hearty congratulations to all involved – Heide is a fantastic jewel in Melbourne’s Arts landscape and should definitely be supported to ensure it’s works of art and ties to Australia’s art history remain accessible to everyone), Marg and I had a lovely morning with the added bonus of knowing that win, lose or draw we could walk away from the Awards presentation knowing the team’s hard work had been recognised and appreciated on a public stage.

It has been interesting to note that to date, with State Awards ceremonies now completed in South Australia, Northern Territory, New South Wales and the ACT (with Tasmania and Queensland happening later this week), our project is still the only Individual Artist to have been named in the “Good Practice Recognition” list nationally – which also includes Bell Shakespeare Company, Sydney Theatre Company, Adelaide Festival, Adelaide Fringe, Art Gallery of South Australia, Darwin Symphony Orchestra, South Australian Museum, Sydney Dance Company, Australian Youth Orchestra, Art Gallery of Western Australia, Film & Television Institute WA and Perth International Arts Festival..  This is a huge testament to the hard work, passion and integrity of the entire team working on “A Life Unexpected”, but in particular, Marg Woodlock-McLean who has worked tirelessly to implement and execute our donations program with such success.

We would also like to take this opportunity to again thank all our donors and supporters for making this project possible.  Without you we would not have been able to get to Europe to film our first round of interviews which has helped move the project forward immensely.  We will continue to raise donations via the AbaF, but will also be adding an investment focus for private investors and business to our fundraising mix for the project – details for this aspect will be coming soon.

Thank you again to all the “A Life Unexpected” team, to our donors and supporters and to the AbaF for their incredibly valuable services to independent artists and practitioners in the arts.

And now? Onto getting this project finished and out to the world!