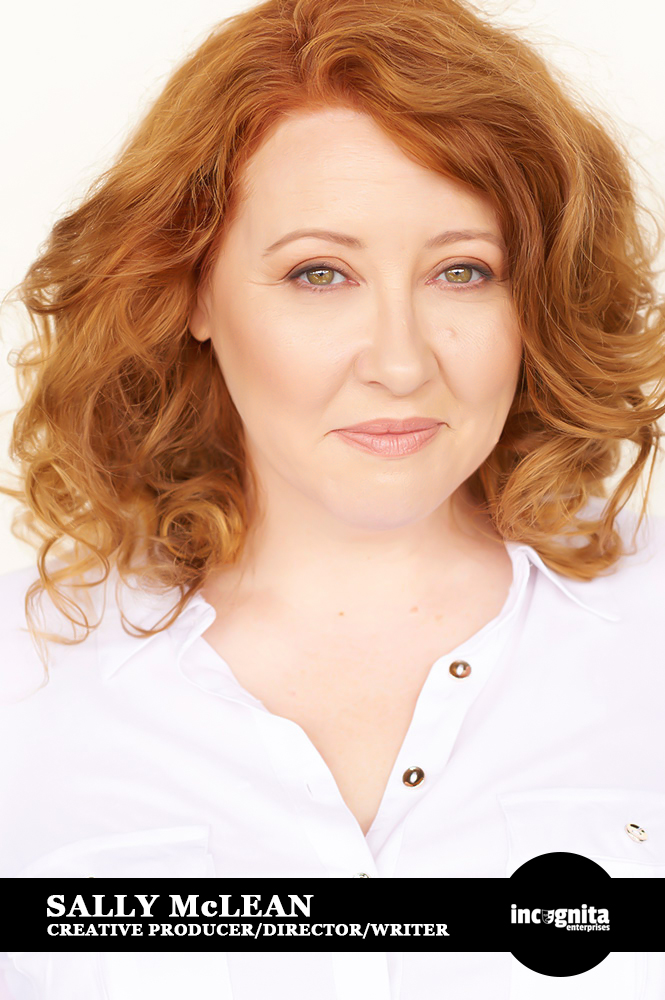 A graduate of The Actors’ Institute, London, award-winning actor, writer & director Sally McLean began her work in film co-writing and co-producing the successful 45 minute feature A Little Rain Must Fall (invited to screen at the Cannes Film Festival) which premiered at Ealing Studios, London in July 1997 with Sally in the role of "Andy". She made her debut film as writer/director/producer with the short film fixNATION in 2004 (screened on OutThere, Foxtel 2005, Selected: Best of Anything Goes Film Screenings 2004, Melbourne), going on to complete her second short film Brigit & Benny (a modern faerietale) (Selected: The Festival of the Spirit, US) in 2005 with her in the role of "Brigit". Sally then co-wrote, co-Executive Produced and played the lead of "Madeleine La Roy" in the 25 minute short film Why Must The Show Go On?, which is now being developed into a six part web series and interactive online broadcast.

BBC Single Drama & Film (now BBC Film) wrote of A Little Rain Must Fall:
" ... immensely enjoyable ... wonderfully realistic ... refreshing ... The cast played their well defined characters superbly without exception ... (the dramatic events in the film) were handled both by the cast and writers with skill and sensitivity."

Prior to this, she worked in production with the BBC in both their Music & Arts and Commercial Channels Depts. (now UKTV Channels), during which time she Chaired the BBC Alternative Program Development Unit and Australian Program Development Unit, submitting several successful television program proposals to the Controllers of BBC1 & 2.

Since her return to Australia, alongside her acting career, she has worked in production for Channel 9, Southern Cross Broadcasting, Freemantle Media and Endemol Southern Star on programs such as Big Brother, Comedy Inc. and 1 vs 100.

In May 2017 Sally was approached and took a position on the Trustee Board for the Howard Fine Acting Studio Australia, sister studio to the world-class, technique-driven actor training studio in Los Angeles founded by the multi award-winning Howard Fine, and will be a guest teacher for the Australian studio in 2018. In September 2017, she additionally accepted the invitation to take up the position of General Manager and Board Member of premiere web series festival, Melbourne WebFest, the fourth webfest to be established in the world and the original and largest web series festival in the Southern Hemisphere.

As an actor, Sally’s film credits include roles in numerous independent short and feature films in both Australia and the UK. She has also played leading roles in over thirty Australian and UK stage productions including the Australian Premier of the off-Broadway hit, I Love You, You’re Perfect, Now Change with Julia Morris and Matt Hetherington, at the Athenaeum Theatre, during the Melbourne International Comedy Festival, and a vast array of roles in UK and Australian television including Jack Irish, Utopia, The Worst Year of My Life - Again!, The Bazura Project, Comedy Inc., Blue Heelers, Neighbours, Lowdown, Totally Full Frontal, The D Generation and the BBC mini-series Bootleg in the lead role of "Angie Powers". She continues to work primarily as an actor, producing her various writing and directing projects under the Incognita banner.

Projects currently in production on Incognita's slate written, directed and produced by Sally, include the documentary Champion (working title) and the multi award-winning and critically acclaimed web series Shakespeare Republic, starring Michala Banas, Nadine Garner, Alan Fletcher, Dean Haglund, Christopher Kirby, Billy Smedley and Rowena Hutson, among others, which is currently in its second season and has now screened at over 50 film festivals worldwide and won 18 awards to date.

Luke Buckmaster at The Guardian wrote about Shakespeare Republic (Season Two):
"(a) polished, beautifully made series from director/producer Sally McLean ... A fine use of the platform and, more importantly, a very fine adaptation of the Bard, McLean’s assortment of cherry-picked monologues sparkle anew in fresh contemporary settings ... Shakespeare Republic is put together with grace and wit. An assortment of actors do terrific work making the (non-dumbed down) dialogue accessible, prying it open with great care and skill."

Her first play as writer/director/producer, Chasing Pegasus: A Play in Ten Chords (written and workshopped in 2003), premiered in October 2006 as part of the Melbourne Fringe Festival, with her in the role of "Katherine". Her second theatre production, again as writer/director/producer, P.S I Love You, premiered in July 2004, again to full audiences, with her in the role of "Elsie". Excerpts from her second WW2 play Bayonets and Bully Beef, were showcased under her direction at the Your Text Here playwrights' showcase at the Melbourne Arts Centre in July 2005.

Theatre Alive (an Arts Victoria initiative) wrote of Chasing Pegasus (a play in ten chords):
"...confronting, thought provoking and engaging ... an experience that shouldn't be missed."

Sally's professional memberships include the Media Entertainment and Arts Alliance (MEAA) and Associate Member of the Australian Directors' Guild (ADG), as well as being a Professional Member of the Australian Film Institute and AACTA (Actor Chapter), serving as a Juror on numerous individual award categories for several years for the AFI Awards and AACTA Awards (the AFI Awards’ successor). She has also had the pleasure of serving as a Juror for the 2014-2016 ATOM Awards in the Best Documentary Award categories. She is also a previous member of British Equity.

Sally is currently working on three feature film screenplays in various stages of development, as well as completing her next play Bayonets & Bully Beef. Other projects in development include the TV and web series Faerie (working title), 'Till The Boys Come Home (adapted from her play P.S. I Love You) and Dalny (co-written with Christopher Kirby, adapted from Sally's original feature film script of the same name), as well as Season Three of Shakespeare Republic.