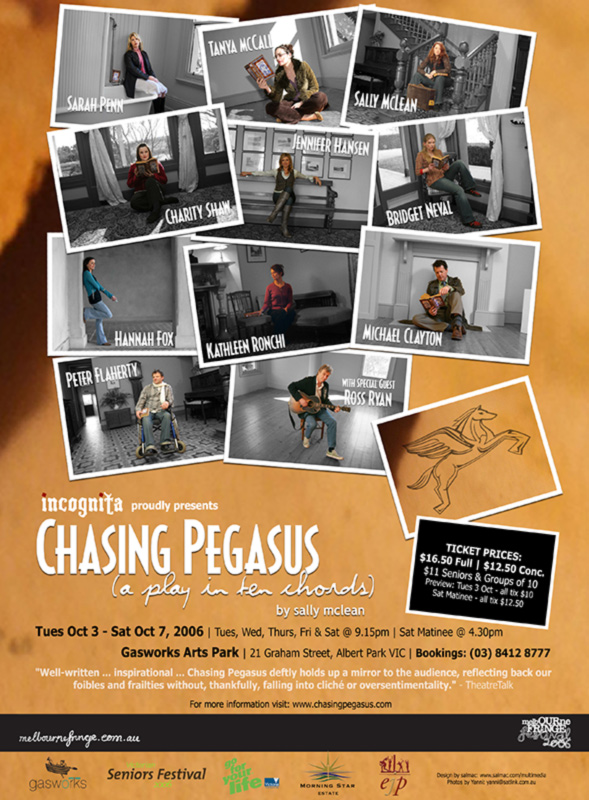 A celebration of what makes us different, and through that discovery, a recognition of what makes us ultimately the same, Chasing Pegasus (a play in ten chords) focuses not on accepting our place in the world, but rather on the continuing quest of humankind to become more than the sum of our parts.

A housewife, two teenagers, a school teacher, an ex-singer, a deaf girl, an accountant, a book shop owner and a shop girl. What do these people have in common? They are all members of the Serendipity Book Club and they are all about to embark on an unexpected journey ...

The Serendipity Book Shop is hosting their weekly Book Club meeting. Tonight they are discussing the bestseller, "Chasing Pegasus". There is an air of anticipation as they will also be meeting the book's author, the reclusive and mysterious Franklin Storey.

All begins relatively normally, but during the course of the evening, each member of the group begins to reveal their personal history and future dreams - caught in the spell of "Chasing Pegasus".

"What lies behind us, and what lies before us are tiny matters compared to what lies within us”
- Ralph Waldo Emerson

"... confronting, thought provoking and engaging .. an experience that shouldn't be missed" - TheatreAlive

"... if you're in the mood for some dramatic theatre with interesting characters, inspiring stories and a feel-good, uplifting message, Chasing Pegasus provides an ultimately engaging hour of theatre." - 3RRR

"Well-written and even, dare I say, inspirational, Chasing Pegasus deftly holds up a mirror to the audience, reflecting back our foibles and frailties ..." - Tara Wilkins, TheatreTalk