What a year we’ve had! We completed Season Two of Shakespeare Republic, which then went on to have an amazing run on the international film festival circuit (and will hopefully continue for a few more months yet), then produced our first Shakespeare short film, Speaking Daggers, which launched at ACMI in May this year as a feature of the Arts Learning Festival in Melbourne and is doing it’s own festival tour at the moment, followed by shooting the pitch teaser for our newest project in the stable, the TV series Till The Boys Come Home before heading off to the USA for 12 days to attend a couple of award ceremonies and festivals, finally returning back home to take a short breather before launching into 2018 and all it already has lined up on offer for the team!

THE YEAR IN BRIEF

Both of our Shakespeare projects have been doing amazing things out on the festival circuit – Shakespeare Republic has now won 9 awards and received 32 nominations around the world and Speaking Daggers has landed it’s first award for Best Short Film at the Peak City International Film Festival, as well as receiving a Highly Commended nod from the Jury of the Shakespeare Birthplace Trust’s 2017 Shakespeare Film Festival, headed by Sir Kenneth Branagh.

During that trip, we also attended the fantastic NYC Web Fest, where Shakespeare Republic was nominated for two awards, attended the Peak City International Film Festival in North Carolina where we were delighted to be able to accept the Best Short Film award for Speaking Daggers and then learned that Shakespeare Republic had won Best Original Idea at Rio Web Fest while we were in LA!

It’s been an amazing year for members of the Incognita team, with our cinematographer, Shaun Herbertson (Shakespeare Republic, Speaking Daggers & Champion) winning Best Cinematography at Sicily Web Fest, Christopher Kirby winning two awards for Best Actor for Shakespeare Republic (Austin Web Fest and Baltimore New Media Web Fest), regular make up artist Jo Fletcher (Shakespeare Republic & Champion) taking out Best Hair & Make Up at Tuscany Web Fest (shared with the rest of the Shakespeare Republic Make Up team) and three of our projects taking out a total of twelve awards around the circuit, including the trailer for our feature documentary, Champion, which is still in production and received the Judges Choice Award for Best Trailer from the Brownsville International Film Festival in the USA!

September saw us embark on a new journey – our first original drama series, ‘Till The Boys Come Home. We headed off to shoot a pitch teaser for the series, which features cast members Nadine Garner, Christopher Kirby, Sarah Hallam, Sally McLean, Billy Smedley, Jessica To and Nikolas Morris, which will be released to the public later today on the ‘Till The Boys Come Home website. Since shooting the teaser, we are delighted to say that Incognita regulars Dean Haglund, Alan Fletcher and Michala Banas are also joining the cast and we look forward to bringing you the story of women on the home front of Melbourne during WW2 in 2019.

Shakespeare Republic and Speaking Daggers have a few more festivals to come on the circuit and we also begin work with Independent Schools Victoria to bring Speaking Daggers into Victorian schools as part of the curriculum with a specially designed education initiative that we will be developing with ISV in the first couple of months of 2018.

We will also be developing Season Three of Shakespeare Republic – #GodsAndMonsters, with a view to filming in mid-2018. We will also be in development and financing for ‘Till The Boys Come Home, as well as developing our historical fantasy series Dalny.

Coming up in early 2018 is the biennial conference of the Australian and New Zealand Shakespeare Association (ANZSA) at the University of Melbourne, where Shakespeare Republic has been given it’s own panel, chaired by Susan Bye (who moderated our Q&A panel at ACMI for Speaking Daggers, in her capacity as Education Manager, ACMI). We are very excited to have been invited to take part in next year’s conference, where academics from Australia, New Zealand, China, United States and more come together to discuss and learn about all things Shakespeare and Elizabethan. Our session takes place on Friday February 9th at 6pm prior to the Conference’s closing dinner. More details will be announced closer to the date.

On a personal note from the Incognita producing team’s point of view, Sally McLean will be returning to teaching with two new courses – Playing Shakespeare: Performing The Bard and Creating Worlds: Producing Your Own Work. Both courses will take place in the first half of 2018 – more details to come in January. Sally will also be hard at work in her role as General Manager of Melbourne Web Fest and a Trustee for the Howard Fine Acting Studio Australia.

Christopher Kirby is currently appearing in the new series of Wolf Creek on Stan. as lead character “Bruce” and has several other things on the go (as always), as well as undertaking his duties as a fellow HFAS Australia Trustee and Billy Smedley is looking forward to the release of the long-awaited Terry Pratchett adaptation, Troll Bridge from our friends over at Snowgum Films, where he plays the lead role of “Hawksburn”. 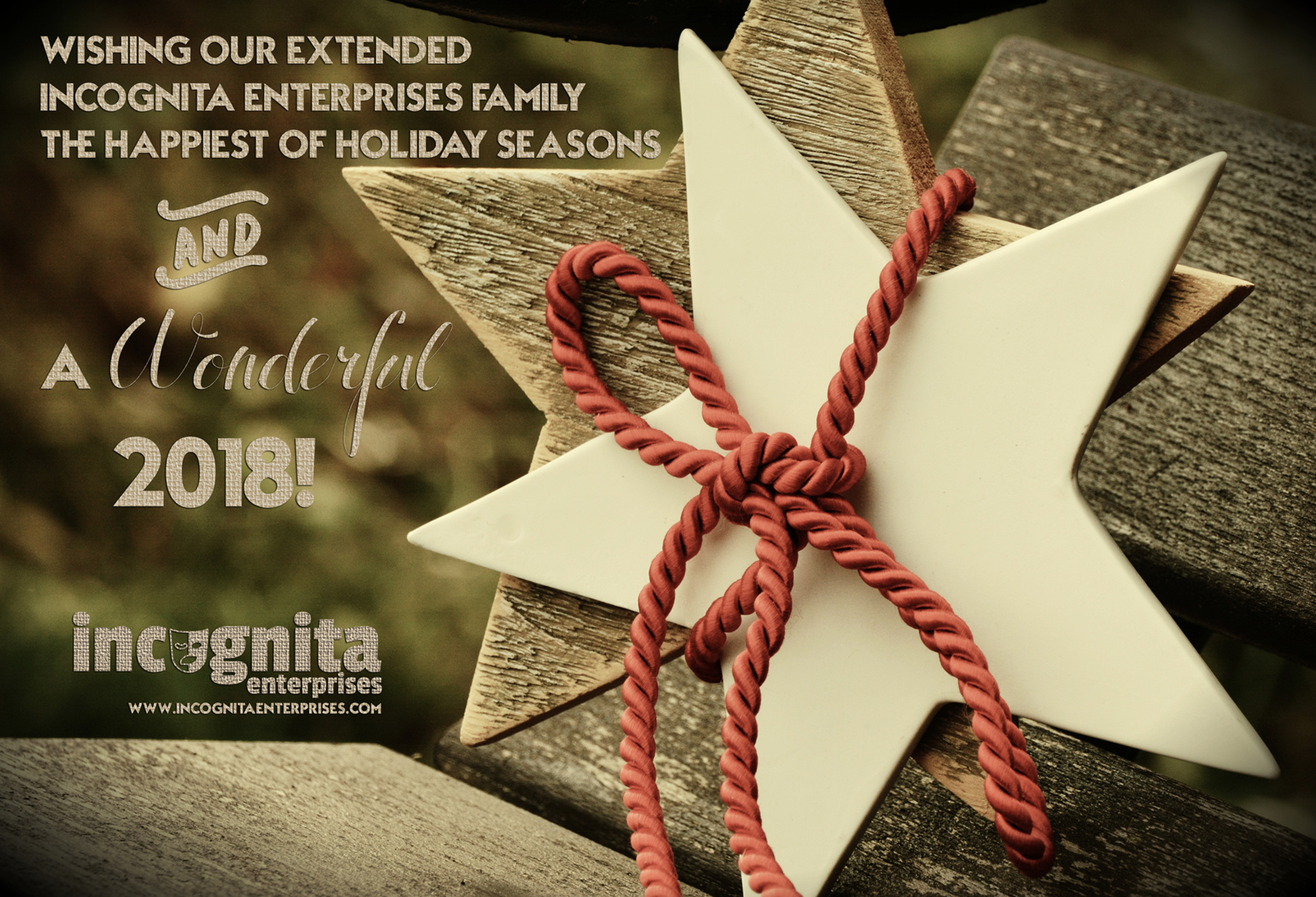 Thank you to all our supporters, donors, backers, sponsors and viewers for your support and active interest in our work this year – it is greatly appreciated and we are blessed to have you all as part of the family.

Thank you to the organisers at festivals around the world who selected, nominated and awarded our work with such enthusiasm and appreciation – many of whom we also formed a truly genuine relationship with as a result.

Thank you to the podcasters, reviewers, bloggers, writers and journalists who promoted our work to the wider world with such generosity and considered thought.

And thank you to our fellow web series creators and filmmakers from around the globe who so generously celebrated the highs with us and gave us a shoulder to lean on when the pace of this year threatened to get away from us. You are all stars and we are so grateful to be part of such a wonderful international community of creatives.

Finally, thank you to our production partners and our amazing cast and crew for all your hard work, senses of humour, talent and love for the work. You guys make all the craziness so worthwhile and should be so proud of your work – we know we are!

With much joy and goodwill from our team to you – Wishing everyone a wonderful Holiday Season and a truly magical 2018.