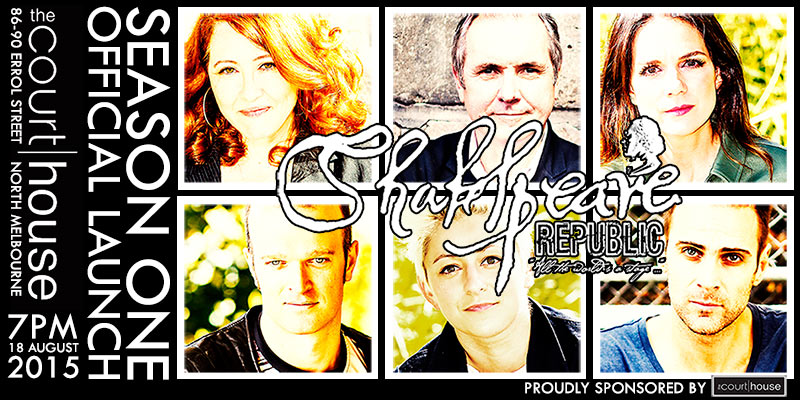 We are delighted to announce that our Official Launch event for Shakespeare Republic has been announced!

Produced by Sally McLean, Perri Cummings and Billy Smedley, Shakespeare Republicaims to explore Shakespeare’s work via modern settings and through the lens of current issues and events with a distinct Australian flavour. During the first series we will be meeting a collection of his iconic characters including Macbeth, Juliet and Hamlet but with a modern twist, giving greater resonance to these classic texts for a new audience.

Using of some of Shakespeare’s most famous monologues and sonnets, each episode is a stand-alone “snapshot” set very much in the present, highlighting how Shakespeare is still relevant in the 21st Century, 425 years after he first put quill to parchment.

We have assembled a cast of true Shakespeare enthusiasts mixed with first-timers to the world of the Bard for Season One including Alan Fletcher (Neighbours), Michala Banas(Upper Middle Bogan, Nowhere Boys), Rowena Hutson (A Four Eyed Guide To The Galaxy),Ben Steel (Home & Away, Winners & Losers), Billy Smedley (Miss Fisher’s Murder Mysteries) and series creator Sally McLean (Utopia, The Worst Year Of My Life – Again!). First up on the night will be Alan Fletcher with his modern day but equally murderous Macbeth.

Come and join us for free glass of bubbly and some banter from the Bard.

RSVP via Eventbrite (link below) to ENSURE you are on the Guest List to gain entry to the event and get your free glass of bubbly and finger food!

To find out more about the series and the team behind it, visithttp://www.shakespearerepublic.com

ABOUT THE COURTHOUSE ON ERROL
Established in 1862, The Courthouse Hotel is open every Tuesday to Sunday from 11.30am to late and offers a wide range of beverages as well as a fantastic line up of pub food and a top-rate gluten free menu, which can be enjoyed in their lounge bar or chic cafe/restaurant space.

But The Courthouse is not just a place to enjoy great food and a comfy spot at the bar.  Winner of the Melbourne Fringe Festival Best Venue award in 2014, proprietors Jason and Julie also provide a haven for the Arts Community of North Melbourne and beyond, with several unique performance spaces available and a very Arts friendly attitude.

For more information on how to contact The Courthouse to discuss your next Arts project, visit their website at http://www.courthouseonerrol.com.au/